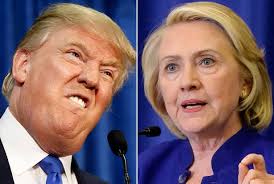 Once i was on the same speaking bill as the infamous fraud  Barry Minkow.  Barry was famous for being one  the youngest people  to ever take a company to IPO.  That company ZZZ Best was a carpet cleaning business that cost his investors over 100 Million US dollars in 1987  and Barry a 25 year prison sentence.

Barry had a tagline that i think bears remembering.  Barry said “Fraud is the skin of the truth stuffed with lies.”

Barry went back to prison not long after that speaking engagement for another stint in federal prison and facing more than 600 Million USD in restitution.

Barry’s tagline  line is  how we get deceived more often than not.  Politicians and others who must make more people happy than not take a seed of truth and stuff it with embellishments, exaggeration etc.

Deception is not outright lying but avoiding the truth.

Because deception is a lot like Barry’s definition of fraud a person  can easily avoid an outright lie and use other tactics like misdirection, omission, or embellishment.  This makes it easier than telling an outright lie of commission.

Most of us just are not equipped to discern the difference.

Tonight’s Debate is one of the more interesting in my lifetime. Not because of substance difference between the two political views, though that would be a great debate if we got it.

More because each  of these politicians has seriously scandalous topics to use on the other. AND each of the candidates has the chance to show us how they handle the  confrontation.

Fight or flight happens when a person feels threatened  no matter how poised or prepared the person may seem.  When fight or flight kicks in things like cadence of movement or cadence of speech change. We can see indicators of deception when a person is  “on the ropes”  and forced to make up details or protect hidden guilty knowledge under scrutiny.

Even without deception there is benefit.  When the Candidates run out of prepared language they need to actually think.  Only then will we get the real mind behind the canned responses.

The complexity is whether the moderator poses or allows the Candidates to pose probing and stressing  questions.

Tonight  you can compare what you see to what experts see. 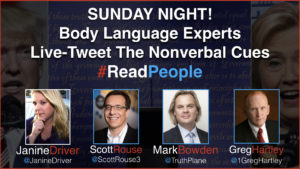 We have as Mark Bowden calls it an “A Team” of body language and behavior analysts to review the debate.  Follow us on twitter and watch the debate as we look for indicators not just that one or both of the candidates are lying, but the debate is effective and we are getting the real person not the canned poised and polished politician.

Gregory Hartley's expertise as an interrogator first earned him honors with the United States Army. More recently, it has drawn organizations such as the Defense Intelligence Agency, Navy SEALS, Federal law enforcement agencies, and national TV to seek his insights about "how to" as well as "why." He resides near Atlanta, Georgia.